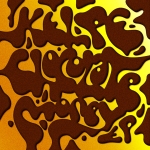 Ever since his first release People are trying to sleep london-based artist Kelpe (pronounce: Kelp) has been the archetype of a sonic adventurer. Influenced by the bleeps & bass of classic Warp artists, the funk of Sly Stone, the minimalism of Steve Reich + Harmonia and the percussive space-scapes of Tortoise + Do Make Say Think, Kelpe has made some of the most interesting instrumental tracks on European soil.

Chocolate Money
The 4-track EP is filled with glitchy beats and spherical melodies and Kelpe once again makes a powerful musical statement with this release. Title track ‘Chocolate Money’ sounds like a forgotten Turkish funk gem, with a saz twanging into the foreground over a backdrop of burbling moogs and heavy percussion. ‘Goldfishing’, with its metallic synths and staccato rhythms has enough itchy urgency to compel any listener into some impromptu body-popping.

On the flipside Kelpe has enlisted the talents of two of his favourite producers: Huess (Inaudible Answer) + Coco Bryce (Harmonia/Myor/Fremdtunes) to rework both A side tracks into their own inimitable stylings. Huess instigates some bizarre twisted Bhangra while Coco Bryce creates an cheekily addictive marimba hook that turns ‘Goldfishing’ into something entirely different.

Press on Chocolate Money EP
Drownedinsound.com: “Gentleman beat-botherer Kel McKeown’s delightfully named EP continues to make a case for his classy, it morphs from one busted speaker to another touching on looped 70s solos as it does, and almost turning the latter Turkish.”
Clashmusic.com (single of the week): “Dense, distorted and delicious”
Lowriderscollective.com: “mad and addictive”