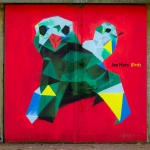 Jay Hats, Eindhoven-based electronic musician, presents his début single ‘Birds’. With the delivery of his firstborn, Hats – known for exceeding musical borders – pulls you into his jungle of dub, nu-soul, jazz, house and hypnotic percussive grooves.

The titletrack arises with a dark, moist atmosphere of Brazil inspired Philicorda-chords, bird noises, poisonous dart frog croaks, and other forest sounds followed by the launch of a half tempo groove. A low, organic bass takes you deeper into the jungle while Dutch singer Kat Sofi seduces you with enchanting vocals. The song is flipped halfway into a percussive double tempo frenzy: a danceable soundstorm of tribal rhythms and heavy bass-sounds that’s energetic and exciting. Hats extends this framework of percussive and addictive beat-thunder on ‘Rise’. The B-side of the single leans on an unfolding bassline that’s flirting with lush Detroit-style synth usage. In the middle ‘Rise’ collapses in on itself showing Jay’s love for drums.

Welcome to the captivating sound-jungle of Jay Hats!