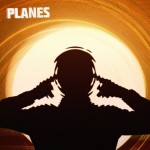 The EP’s title track gets the show on the road, with snappy claps, punchy kicks, dreamy melodies and pitch-excited vocals. Planes easily gets inside your skull. On ‘Pins & Needles’ guest MC C.Monts (known for collabs with 1000names, Lewis Parker etc.) pops up with forceful and highly personal lyrics that ride the uptempo groove. Strengthened by playful basslines and interlaced with a bit-crushed theme this track demands your attention. Planes brings the EP to a close with ‘Voodoo Fetish’, incorporating blurred guitar motifs, slow-moving beats and kooky percussion with saxophonist Simon Panrucker’s sounds taking us further into the wilderness.

In short, button up and dive into the mind of Planes…

ABOUT PLANES
Sky high rhythms and low flying bass: Planes is a fine blend of sun-soaked synths, molten instruments and wily grooves. Planes began where other projects ended, but has since become the focal point of Richard Bultitude’s musical output. In Planes he has found a more positive approach and, although there are moments of nostalgia here and there, this is generally a sound that is looking forward rather than back. The twin ‘My Intention EP’s’ were in some ways a stepping-stone to the sound that has been realized on his debut album ‘Joining Dots‘ (Lab Beat). After remixing Big Mister Doom’s track ‘Genus‘ in 2013, ‘Mind Reader’ is Planes’ first sole expedition on Fremdtunes.