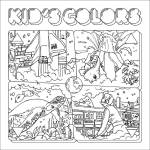 Last day of our coloring contest! You can still join!

Producer/DJ Kid Sundance from Eindhoven has been a household name in the Dutch Hip-hop/music-scene. August 2012 he will release his solo debut Kid’s Colors on Fremdtunes. The record will be released on 12-inch. Of course it needs an eye-popping sleeve. Graphic designer Mister Adam & illustrator Dees made a black and white version. And: we want you to finalize and COLOR THE COVER: read all about the how, what, when’s RIGHT HERE!

Fremdtunes is a Dutch independent music label/collective focussing on fusion beats, future hop and electronic jazz. Plus we love art 'n cool concepts too. Our releases include music by artists like Kid Sundance, Coco Bryce, Moods, Kelpe, Mighty Atlas, Big Mister Doom and many others...